Nov 6 2015: People tell me I write well. Why? You guessed it - Miranda helped edit my doctoral thesis. She finished hers a year earlier, in 1980. Until today her title is incomprehensible to me. Still today after 35 years, her students tell me she's been teaching them what she taught me. Writing is not piecing English words or phrases together. It starts with clear, logical thinking, in whatever language. Then with concise choice of words  expressed with impact. Often our emotions affect our choice of words, but never redundant, with overloaded adjectives. However nothing can adequately express a heart ripped apart by a departed loved one. And she left without a farewell.

So the word is "cardiomyopathy" - death from a broken heart or BHS. Why would that be life-threatening? When there is no end of grieving. Have to control the unexplained  palpitation and mental paralysis.

Nov 8 2015: So I stumbled on a way of coping - by rewinding to life when we just met. Life then was more independent, uncommitted and unfettered. That's becoming the life today. And getting into this frame of mind is liberating.

Nov 11 2015: Deep soliloquy. Am I going bonkers? But it seems many people talk to themselves. Not many people however, take the view that unbeknownst to us we live each day preparing for our deaths. Starting from birth we degrade to the grave. Earthly life, in a sense is unsustainable. Unless you believe in life thereafter. Saw it in person for the past four years - her wonderful assets many admire fading as her brain atrophied. Thankfully the number of visitors wane in the last few months of her demise. It would have been painful for those who well knew her former self. Death stares darkly at my face as a salutary reminder - we must never waste any good thing life throws at us.

Nov 12 2015: In one of the earlier posts while she was comatose I felt like a lone goose flying. Canadian geese mate for life. Here is a haiku from the other blog:
fallenpillar.wordpress.co    - Geese (2011)
Lone Canadian migrating South
Its plaintive cry for his hunted mate
Nothing for life of fidelity
孤雁は南部へ遊走
悲調で迷た仲間を泣きながら
今から一人暮らし 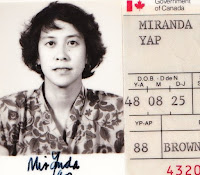 Nov 11: With unspeakable sadness I had to go to the Canadian embassy in order to terminate her entity. Poignant memories rushed back from her youthful photo.

Nov 14 2015: Its a month since she is gone. "Death seems so final", she said of Pi's death 3 weeks before her haemorrhage. Little did I know today I will feel the same of her. I have not the slightest idea of her dying so soon.

Nov 16 2015: Come January next it would have been 35 years marriage, 25 of which we were rarely a couple due to busyness of work. Regret will not bring it back. But I'm at least thankful we have each other 33 years - enough to be time to say "Farewell". But she still has so much potential to give!

Nov 18 2015: "Eh don't eat it so clean lah!" she would say to me, even considerate of the dogs when she bought fried chicken wings. Today one of her grandchildren will have to be put down for a growth in the snout. Two weeks of sadness upon grief had gone by - she had always endured them in their last days, even through the night.

Can Death be good? I ask often.  We are all mortified by the prospect of suffering and pain. But a question that every sane person must ask at some point of his or her life.

Nov 22 2015: Sadness, bewilderment, anger and frustration. If we can live thru them we can survive most emotional trauma. Question of time.

Nov 24 2015: I was angry with God. Who wouldn't? He let the crown jewel of my life slipped from me. Twice. First the harrowing death-stroke followed by 4 years of daily tribulations. Then the gnawing absence since her passing. I had feared for this outcome and now it's reality. Zero chance of cognitive recovery however hard I tried. I saw her struggles daily and it pained me to see her panting for mental strength. And no word from her how should I proceed with life. People say this way I will be able to accept her departure since I had 4 years of her physical presence. But I'm not sure, completely drained out and mentally paralyzed. Actually I'm not sure which is worse - the daily pain from her permanent absence is more excruciating or the trauma of her daily care.

"You won't see her until eternity. She's dead now!", the soft words were almost deafening that I wasn't sure whether it was an angel's or a devil's. "So what're you going to do with your life? " As I awoke the words rang in my head till morning.

Nov 25: Paul was right! The apostle wrote in I Corinth 7 that for higher service widowers and others should preferably remain single. Today the marriage sanctity is defiled as mores in the Western world encourage people to remarry and have multiple remarriage lightly. For those who have lost their first love, they will realize the gravity that remarrying will never be the same as the very first union. Some might think the Apostle is not qualified to say so. He was never married. Paul however  did say that he felt God - inspired to write thus. So somehow the first union is so special. It could only happen exactly once.

Dec 9 2015: The strains of Yuletide cheer brought a groundswell of emotions. We used to be traveling and golfing.  "Blessed are those that mourn, for they will be comforted" - Matt 5:4
Re-reading the responses to this blog have really been a comfort.

Dec 12 2015: So in the mornings I would sit in front of her urn, speaking to her as the thoughts came. Then a friend who visited said that she's not here - Miranda's physical presence is not represented by a photograph or even her ashes. He is right of course.

Written in 1932 by Elizabeth Frye (1905-2004)
"Why seek ye the living among the dead?"  Luke 24:5b
Dec 15 2015: So why can't a single live as full a life as couples? Even more, a widowed has the experience of both worlds. Why should I grind out the storied life of a deprived widower? Therefore live! Free and unadorned. I say to myself each new day.
Dec 23 2015: Major event - Christmas without her for the first time. As i started to clear her office stuff for the New Year the warm words of her past greeting cards started to choke. All the loving words (and photos) from all her associates great and small, friends, family waiting to be thrown away. More hard decisions as her belongings are memories than objects.
Lunar New Year 2016: Alone again naturally. Only the dogs. But I remember once she said that the dogs are enough to keep her company if for some reason I would be away. Today (Feb 7) I find it so hard. Negative thoughts like "Why do I have to marry someone who dies on me?" Are not helpful.