"Have we given our all against a relentless storm? Have every oarsman broken their backs as they strained  to steady the stricken ship? On and on the endless days riven against rocks, bitter wind and biting rain. The spirit tested to submission by the giant waves, but unyielding to the last breath the tempest must be stood. It must pass and we will overcome." (YKT - Collected words)

"Go on - cough it all out!", she stated firmly to her father retching away in his last days. Those days were triple duty for her - starting a new Institute, lecturing and teaching at the University and shuttling back and forth caring for her father at the convalescence center, besides friends and church. Then when he expired there was visible sadness but she turned to me saying softly it was probably best for him. She would even do the same for my mother! Over the years we survived at least half a dozen dachshunds - all equally dear as children to her. One time Hucky was slipping away age 20, being unable to recover from a festering wound. "Hucky, if you have to die, please let it be this week, because I'll be traveling soon..." That night Hucky expired in her arms. Charis, Sweetie, Sassy, Strauss, she had never let anyone go except in her arms. Then she'll say to me, "Death seems so final..." But everyday I keep thinking - what next can I do for her? How can I make her move her eyes and head? How can her weight transfer be improved during physiotherapy? She doesn't like to stand so can the maid, who is a shoulder shorter, do more to stand her (she's dead heavy), or where else can I take her around the house? I understand a team of doctors, specialists and other luminaries met regularly how to keep Singapore's icon (LKY) going as long as practicable. But for Miranda I am the team. When things are left status-quo, she will surely slide downhill. Comfortably lying in bed is her worst enemy - limbs and lungs weaken with lack of use.Then someone might wonder whether does Miranda really need all these? I do. 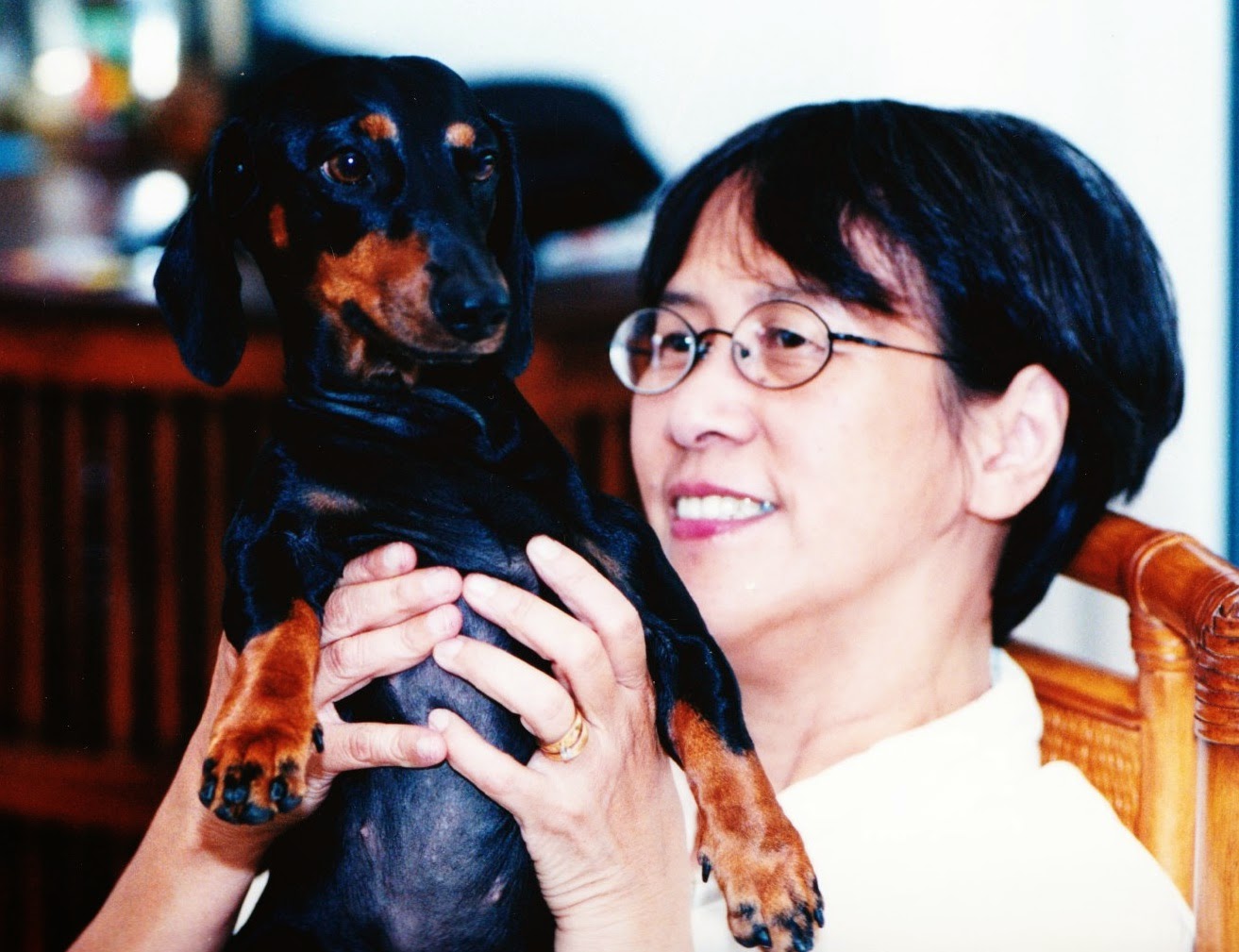 2009: Pi was the "smartest" dachshund on this side of the globe. Her death in August affected her visibly in 2011. Infected by dirty water.
1 Apr 2 pm: This blog is about her - but I am sustained by prayers how to keep a sane mind. Really kept by the concern and prayers of many who read this blog. Inexplicable sadness makes one want to hide in a cave forever. God must not intend for us to have prolonged sadness. His plan for eternity is quite the opposite.

18 Apr 10 am: Getting stronger and harder to resist her tone during physiotherapy. But she must have given up trying to speak. Maybe later.

30 Apr 6 pm: She will look at you if you speak - she had never been able to engage her eyes before. But with no feedback you cannot tell whether she understood you. Only then will the rehab hospital admit her. Even the speech therapist will be doubtful of her swallowing.