Forty one years ago a 27 years young man met a 28 young lady on a tennis court. It was a potent match. The friendship never started until more than a year later. So in 1977 I thought "well, she's gone emigrated to Canada and I'll never catch up." I continued to live my single life searching for purpose and direction alone. I was wrong then. By a determination to see the other half of the world I caught up. It was only coincidental that I pursued a tertiary degree in a State separated from her by Lake Michigan. Thinking back it seems funny - I didn't really have to chase her, just being nearer to where she was. There was no internet or email and postal strikes were common. When we finally linked up in 1979 she had gone one step further in life - her PhD - a huge life goal that now, looking back, seems insignificant. But I told myself again then - had to catch up. So I did, again. Then 30 years of marriage began with her returning home in 1981, leaving me behind. Catch up! So I did, returning 1983. Then she started a distinguished career. It started small, the research unit part-time while still lecturing full-time in 1986. She quickly overtook my research budget. Soaring ahead we had such wonderful experiences together, traveling, boating, climbing and laughing. But I was trying hard catching up with her social, physical and professional life. Then she eclipsed me. All I can say now is "She's gone ahead". See you again?? when I catch up - whenever and however that will be.

"I've no academic standing, just a lowly painter, but if someone's drowning, I'll certainly save." - Volunteer group of Japanese who painted Sugihara House in Lithunia, in memory of Chuine Sugihara, who was castigated by the Japanese government for issuing profligate transit visas to thousands of Jews facing certain extermination at the turn of the Third Reich.

"See the two soaring cranes pictured in our sitting room? You can be the higher one - I just want to be the lower one but going further ahead" - Miranda 1984, soon after we settled back at Jn Hitam Manis. 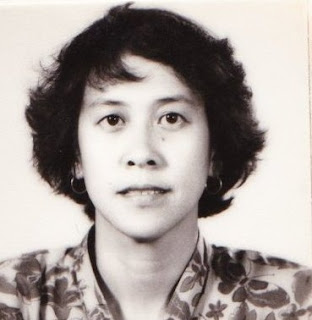 Never miss a chance to get close to those closest to you. They will always be sorely missed.